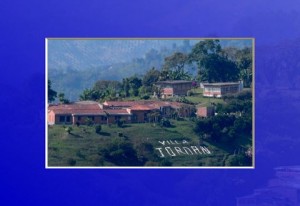 The Villa Jordán is situated in the hills of Manizales, the capital of the Department of Caldas in Colombia. It is the international Noviciate for Salvatorian priests and brothers in Latin America.

The present situation of the patio in the Villa you see in the pictures below is not satisfying and attractive for the students and novices. The necessity to have a spiritual and contemplative area is a premise for a good and successful education. It should be also used as a space for recreation. 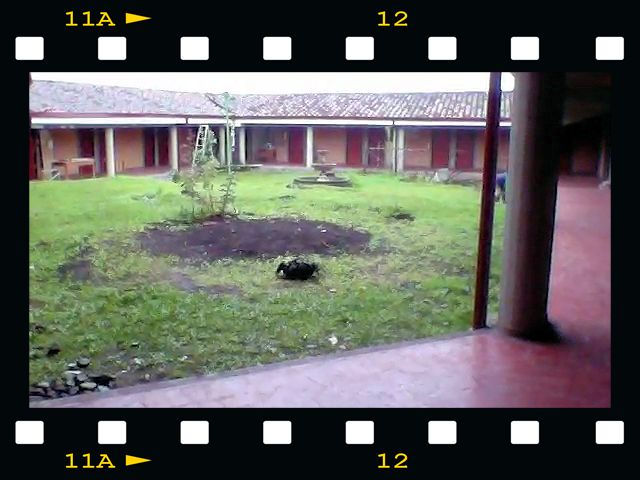 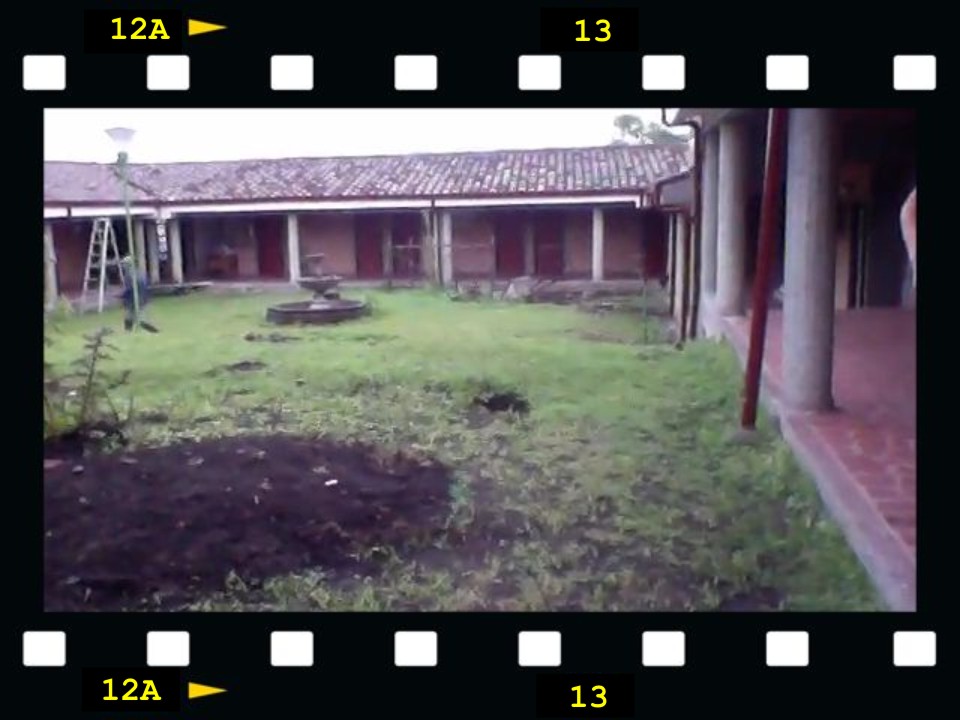 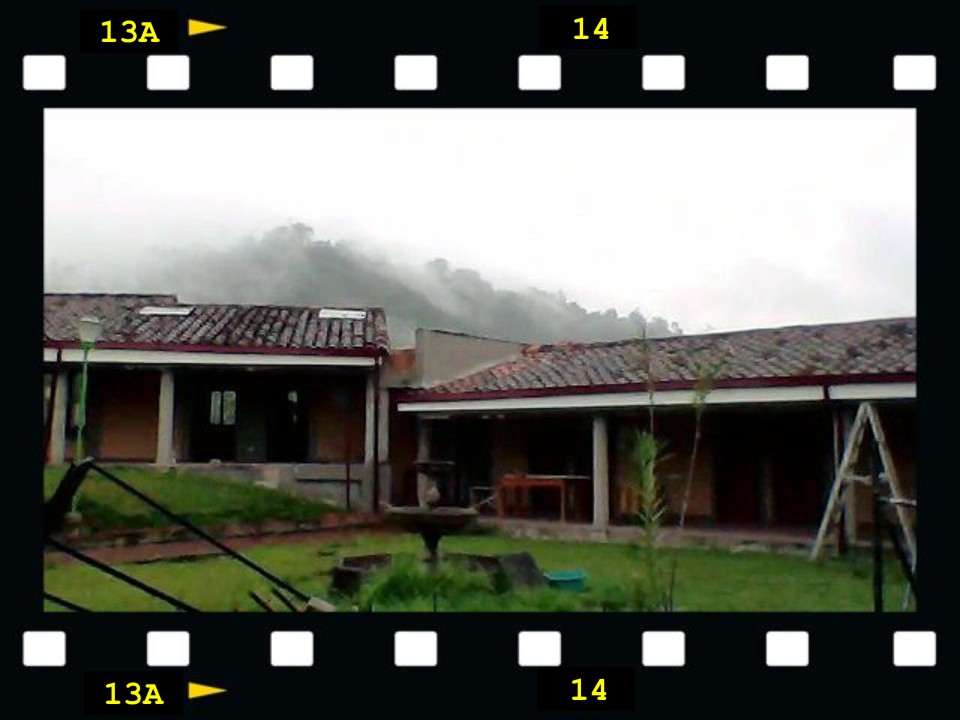 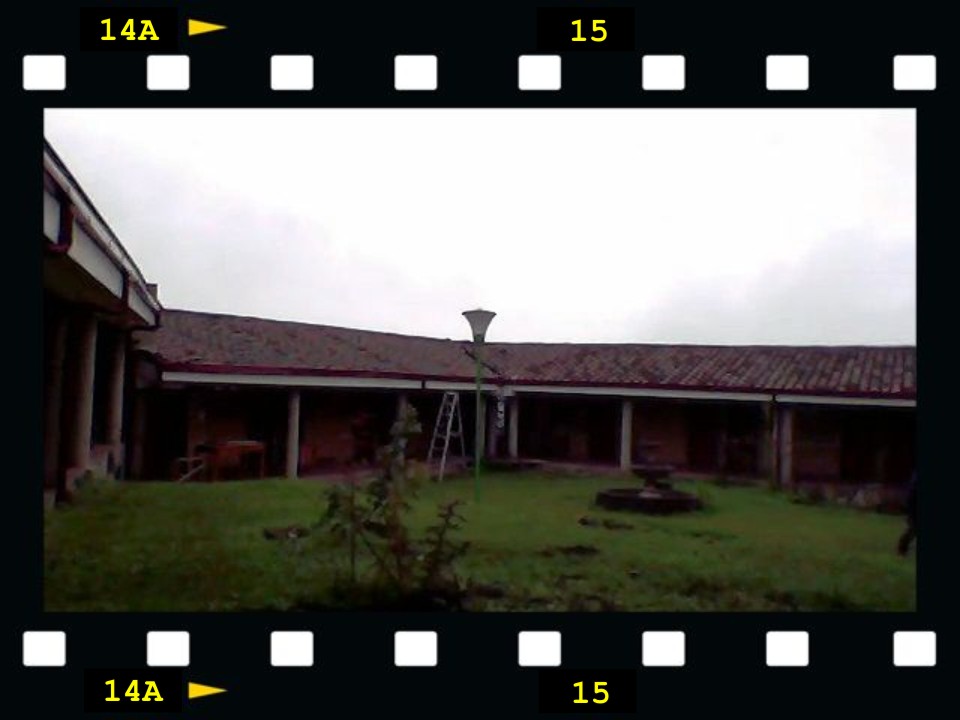 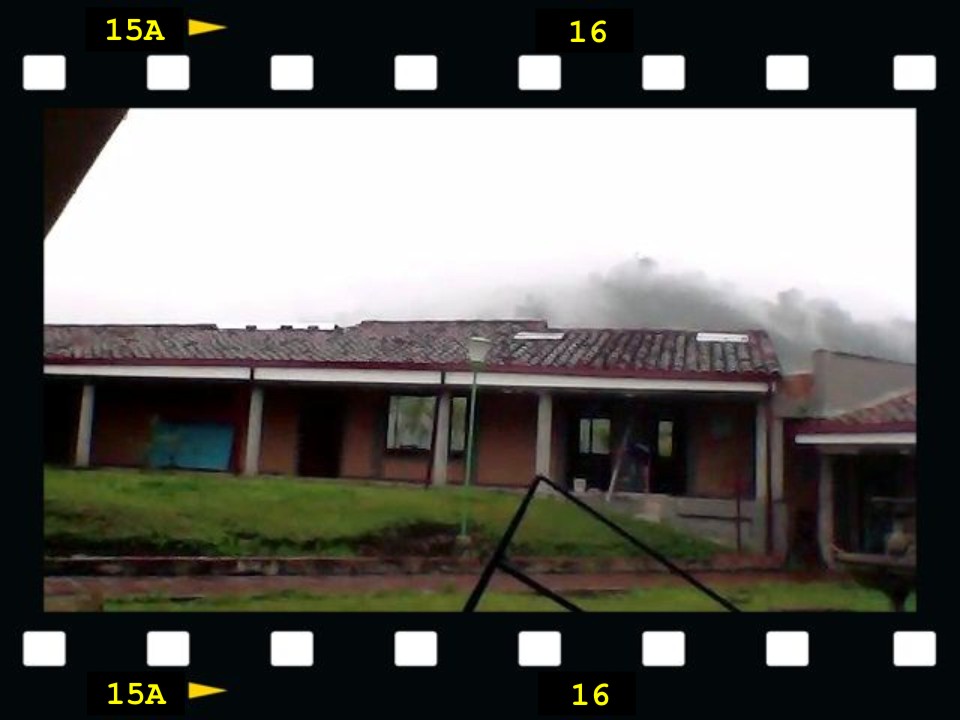 Therefore, I tried to work out two drafts of a possible patio which includes this for a spiritual house important features. A statue of the blessed virgin Mary is centered in both drafts, because I see her as the person of security for the novices. On the other hand is she the connecting piece to Jesus and God. Where should she have her place if not in the center of the garden?

A remark in common: Unfortunately, I’m not a specialist of the botany of Colombia, although I know that this is a very very interesting and rich one. So I tried to use plants from which I know that their habitat fit into the vegetation area. However – there should be always only plants used they are growing around the location and they are typical for this area. Guilty for the design is that the picture should become reality – and this is also possible with similar plants of the region. 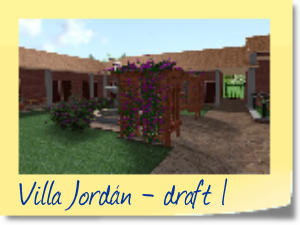 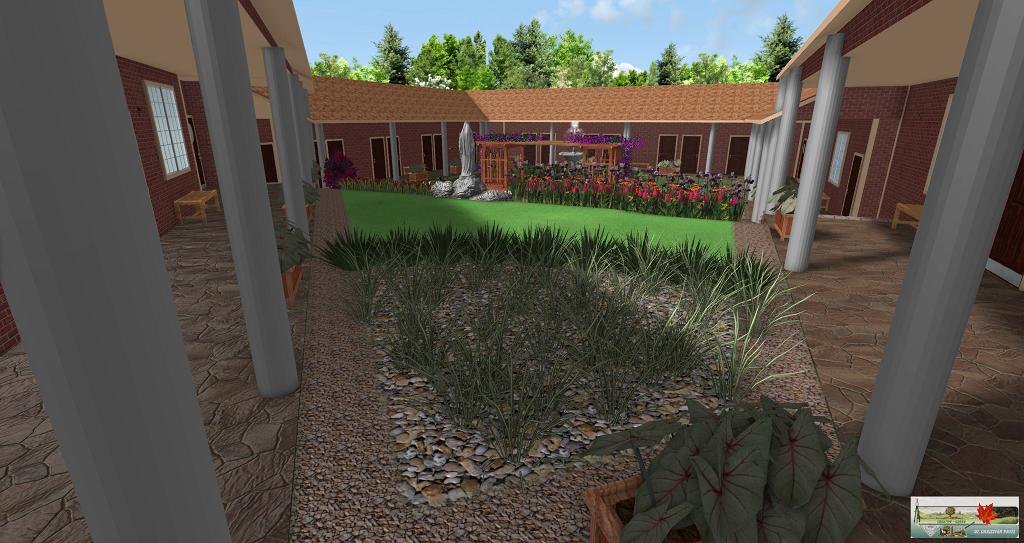 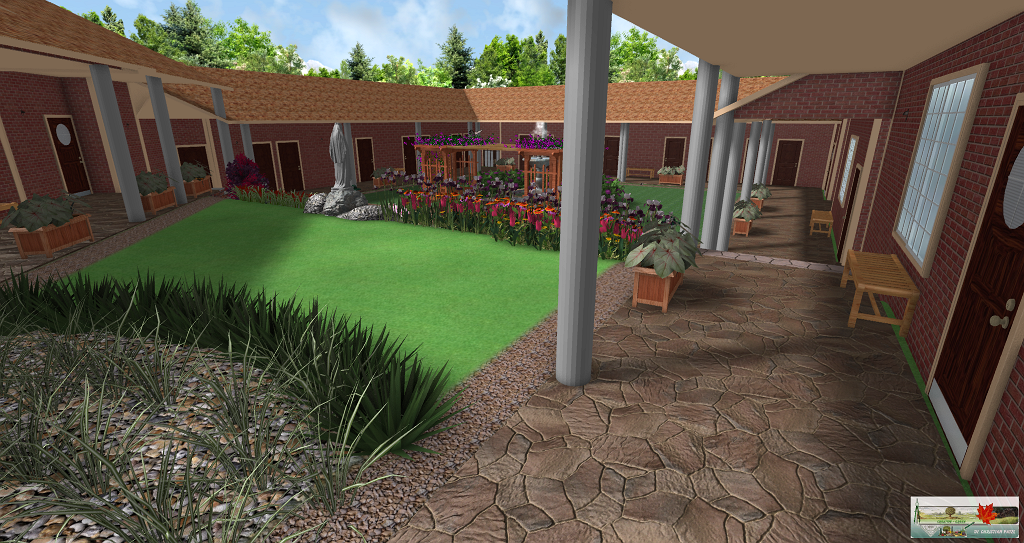 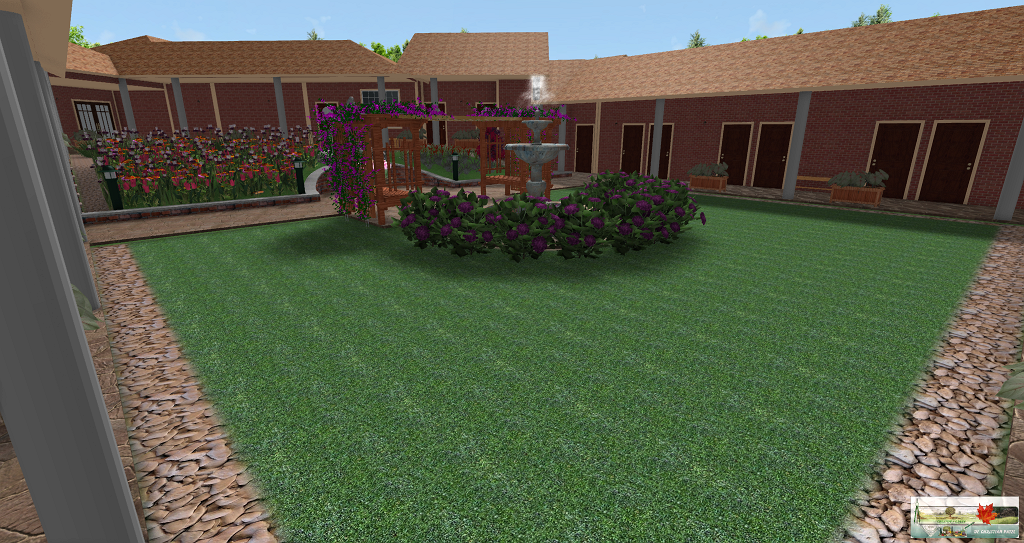 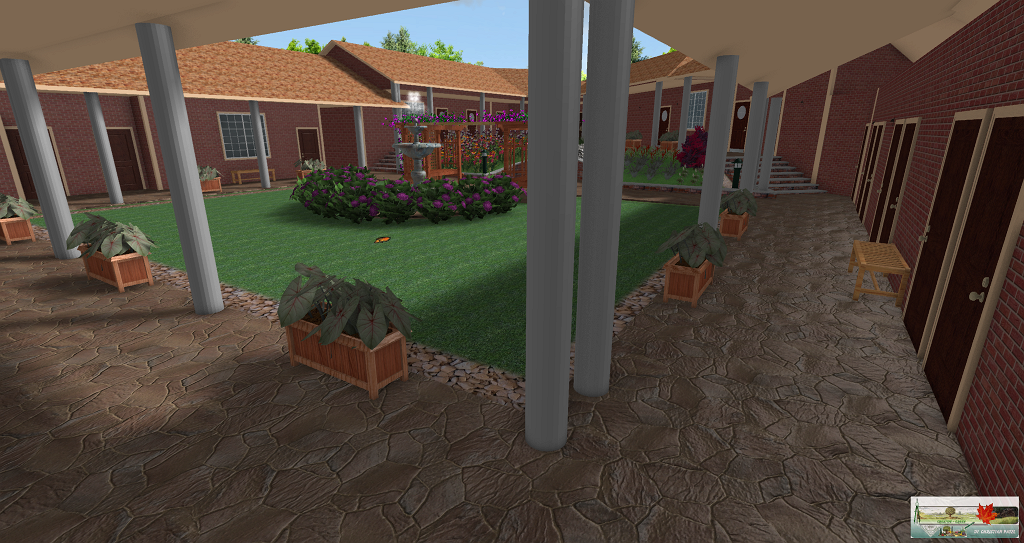 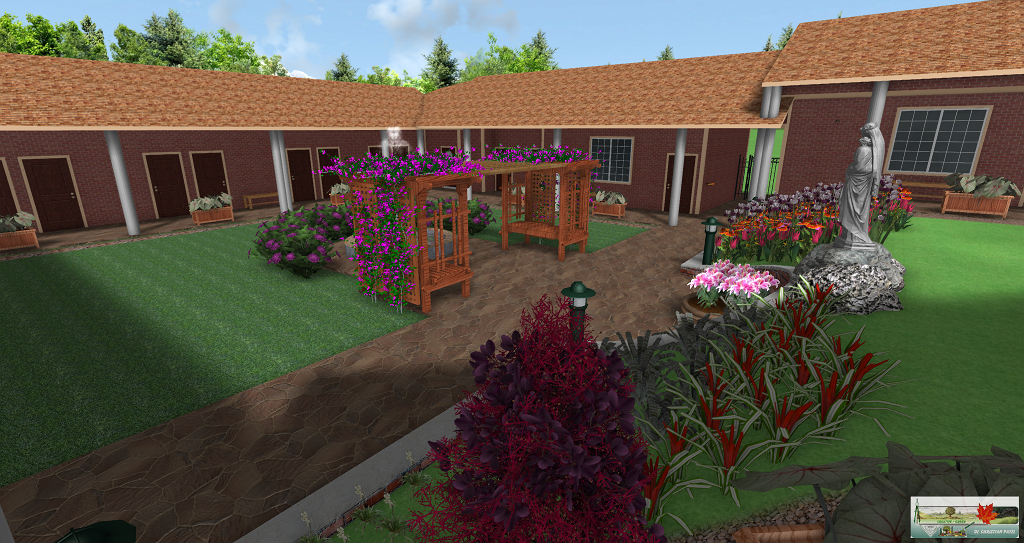 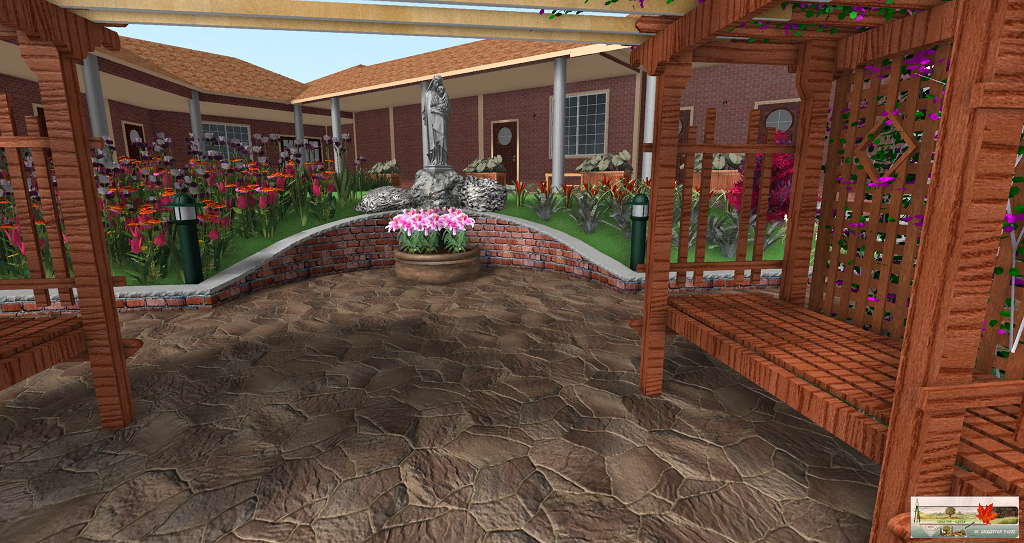 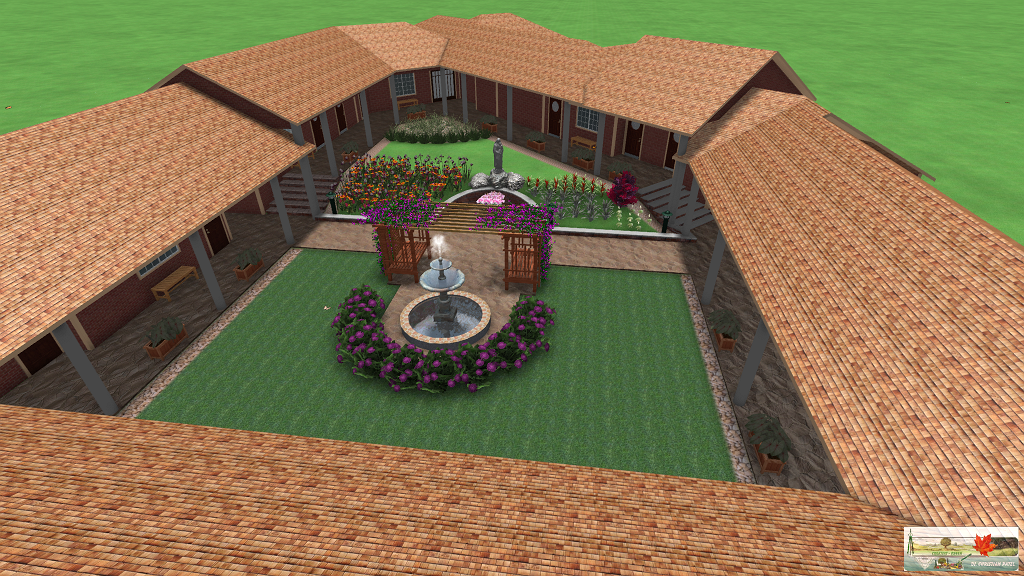 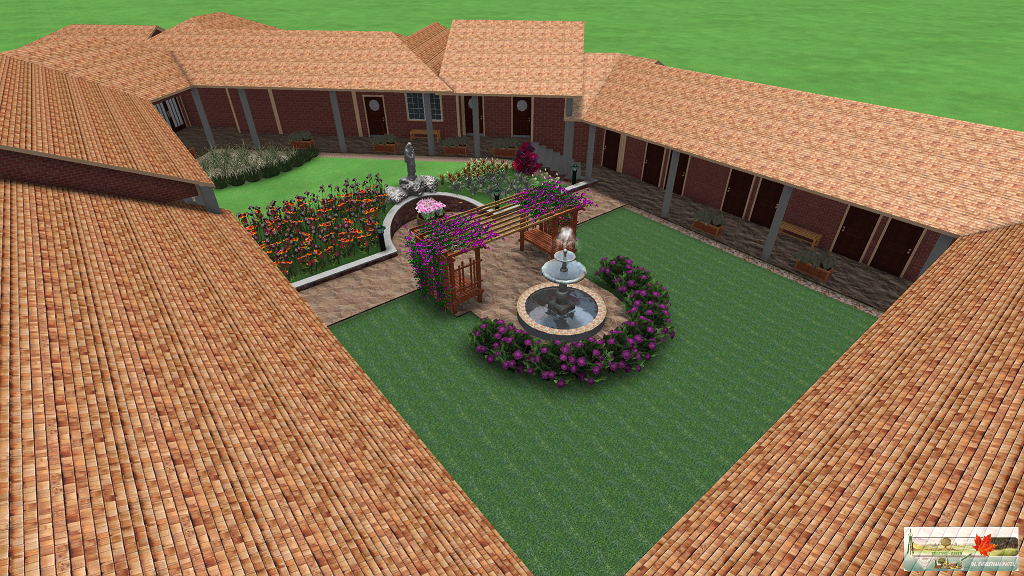 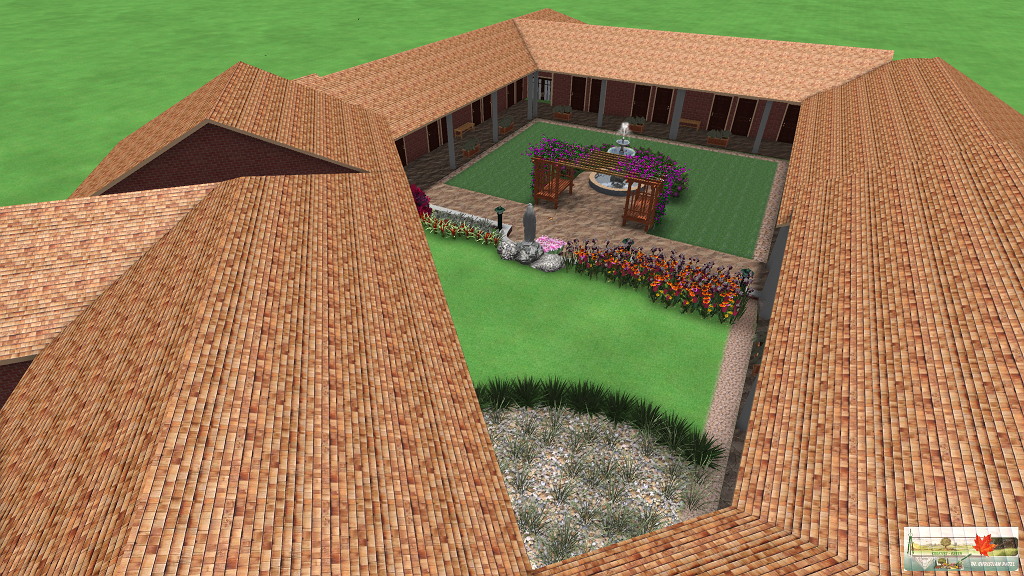 The Polygon close to the entrance corner is planted with grassy plants and bordered with Yucca flaccida or another kind of Yucca. It should be in oppositeto the grassy plants and the lawn. The yucca’s are planted in an arc which has its center in the pillow at the corner near the entrance.

The slope to the area downstairs is plated with different kinds of typical herbaceous perennials. On the east side is a Cotinus coggygria  situated with several species of Bromelia.

4 landscape lights behind the retaining wall replace the present  lantern which is not so comfortable and disturbs the space. You will find the here used lights under this link.

Between the statue of the Holy Virgin and the fountain is an arbor with Bougainvillea spectabilis. This place is especially made for recreation. It’s also near the center and it’s quiet only accentuated by the sound of the fountain. The restored fountain is bounded with a path and plants of Hydrangea macrophylla.

Planters, situated on the way under the canopy, take the green into the house. 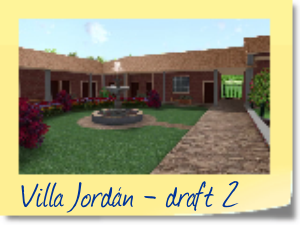 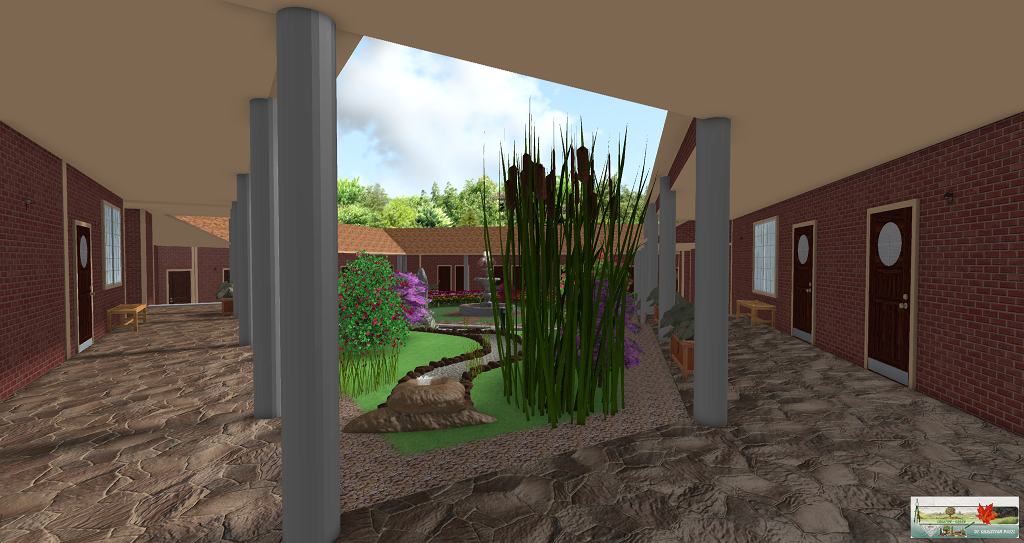 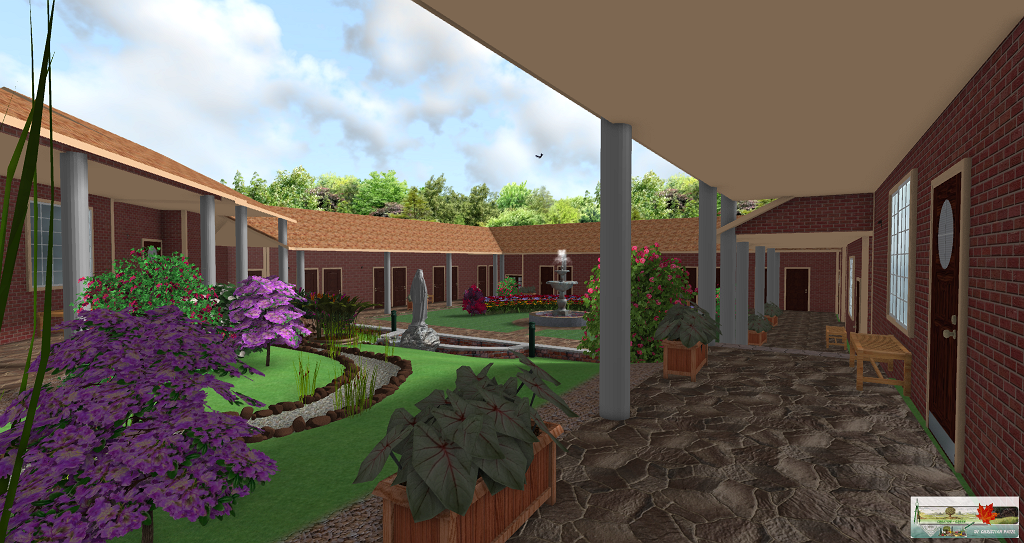 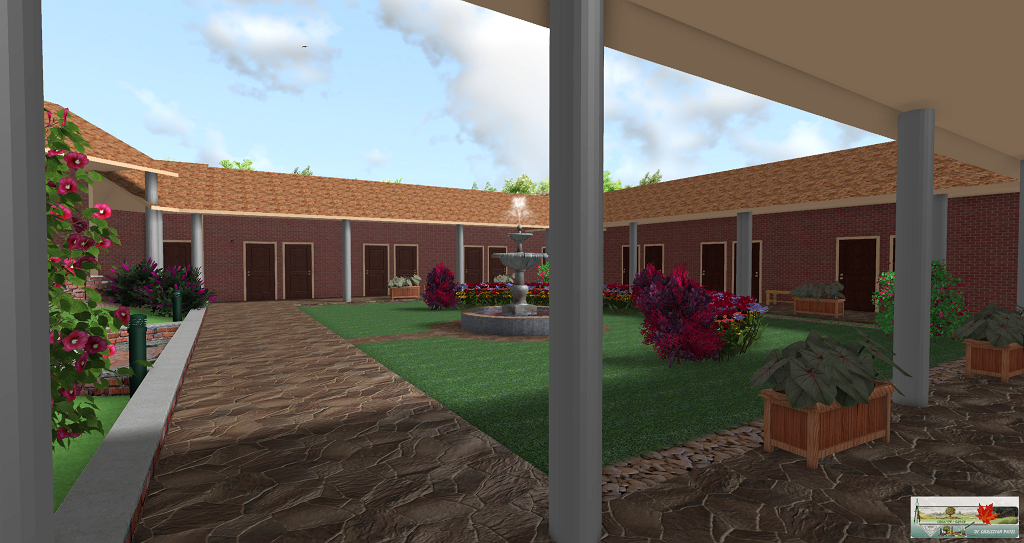 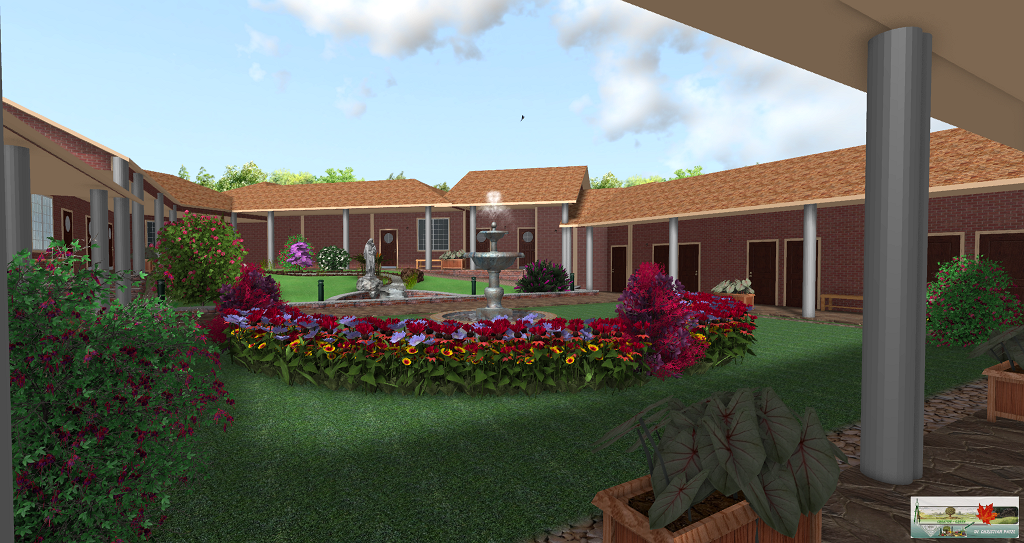 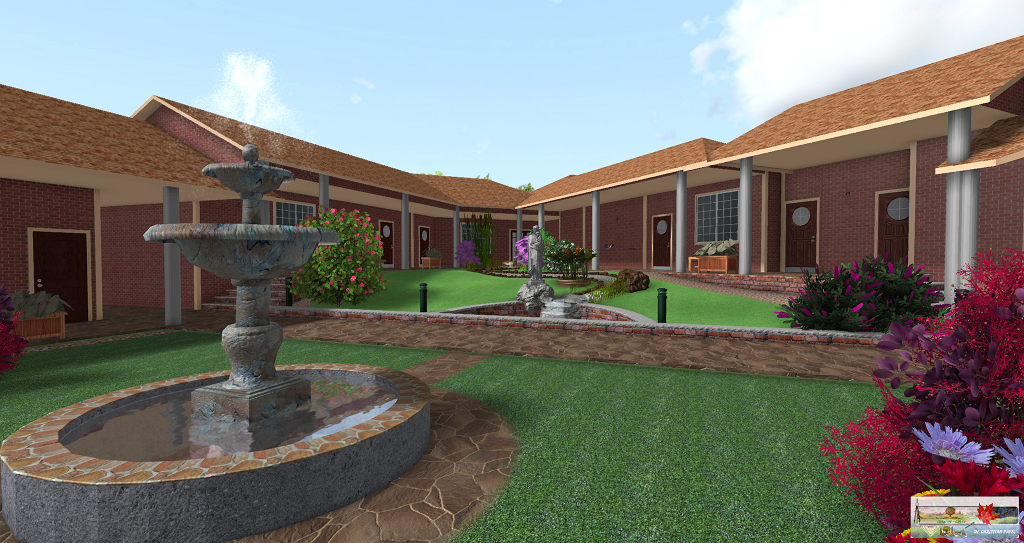 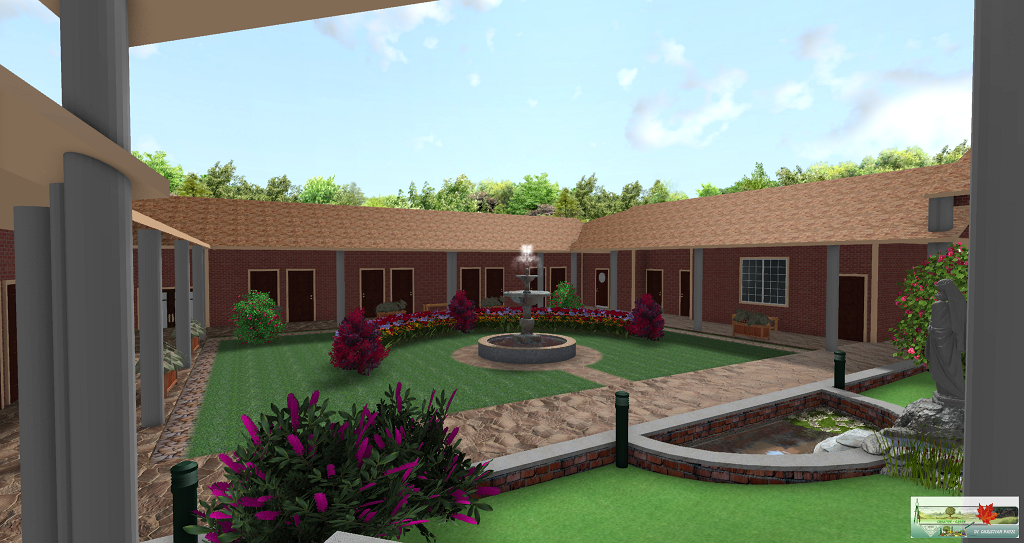 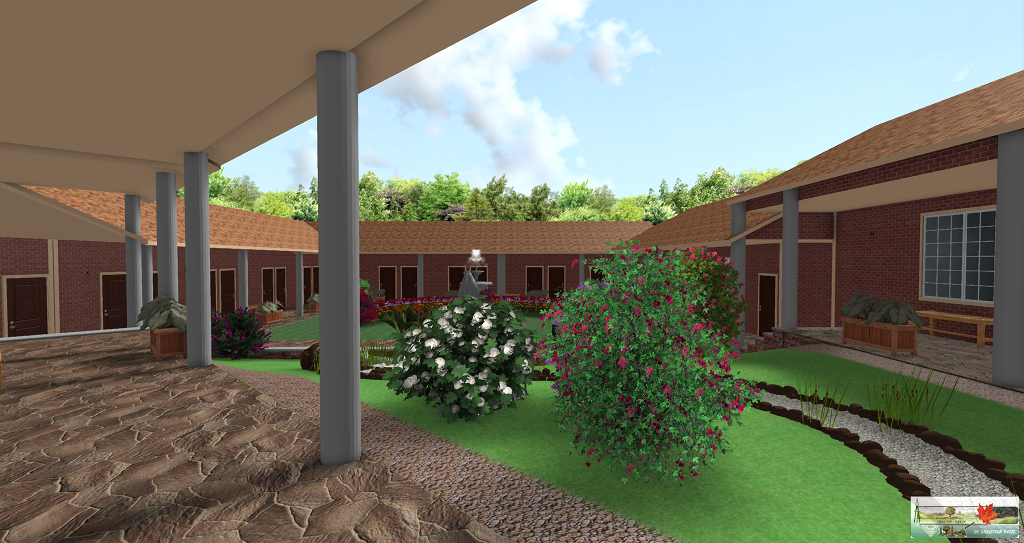 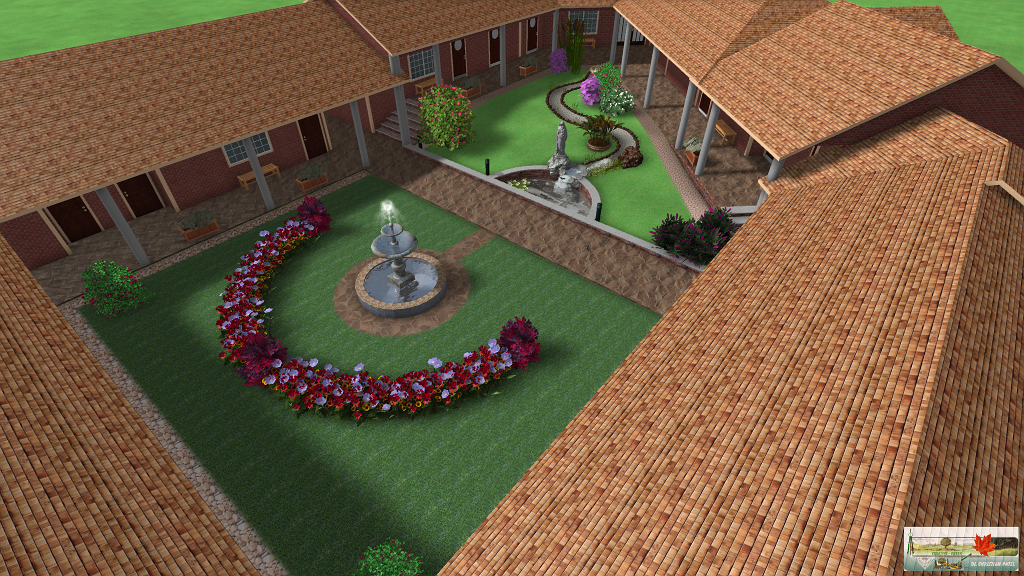 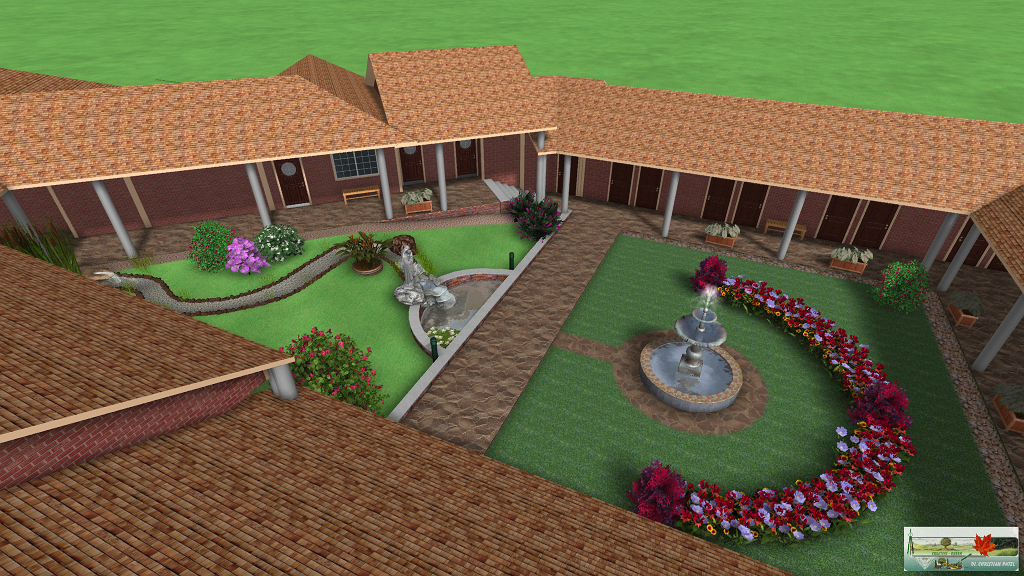 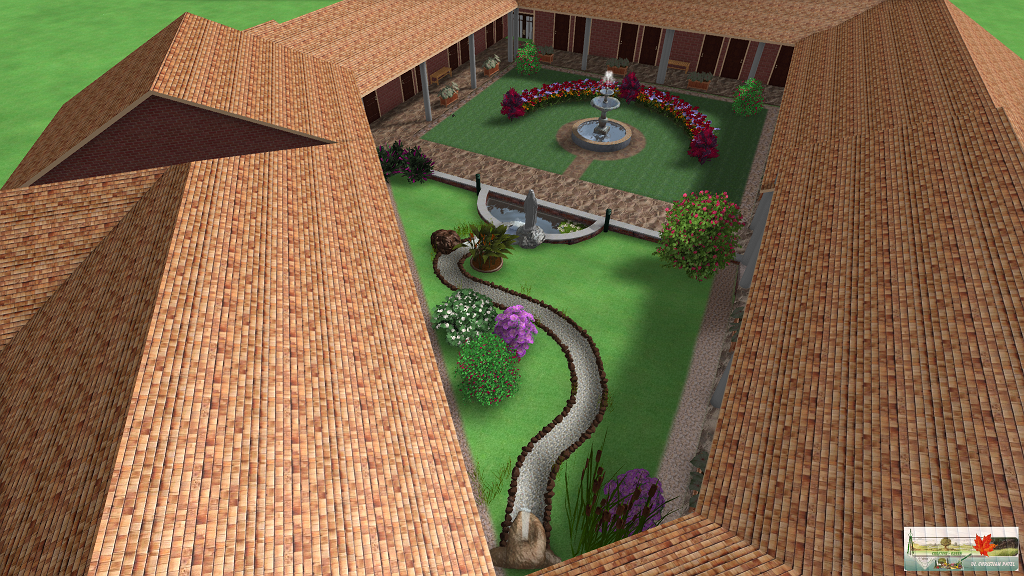 In draft 2 a water source in a rock welcomes the guest or residents in the corner of the opposite of the entrance  of the upper polygon. Typha latifolia and Typha angustifolia escorts the first meters. Two Rhododendron grandiflorum in violet or pink are situated on both sides of the little stream. (Remark: The source and the stream can be also built up as a dry stream → compare like a ZEN garden. This would be a contemplative feature in addition). A Fuchsia magellanica and a white Hydrangea quercifolia are beside the second Rhododendron.

Behind the statue of the Holy Virgin, also placed in the center as in draft 1, a in the soil lowered planter with Strelitza reginae is placed. This planter increases the level of the Strelitzia about 10 cm and the ceramic is a fine contrast to the lawn. In opposite to the Strelitza a rock with a diameter of app. 1m force the stream to change the direction of the artificial pond under the feet of the Holy Virgin. If the stream is built up as a dry stream, so now an artificial water source should rise from the Rock beside of the statue. In the artificial pond Nymphea Alba ‘Virginalis’ are growing. A Hibiscus syriacus and a Buddleja davidii flank right and left the polygon on the border of the lower level.

The main point of the lower level of the area is the restored fountain. A small path made of stone similar to the main path gain entrance to it. The fountain is half way bounded by perennials with a distance of 4.3 m from the middle point of the fountain. In the east, south and west point  of this arc a Cotinus coggygria start, interrupt and end the flower line. Two Fuchsia magellanica in the corners complete the design.

By continuing to use the site, you agree to the use of cookies. more information